Standing out in the Crowd. 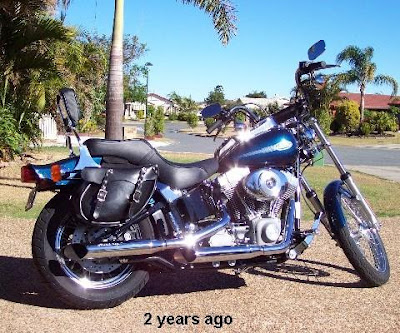 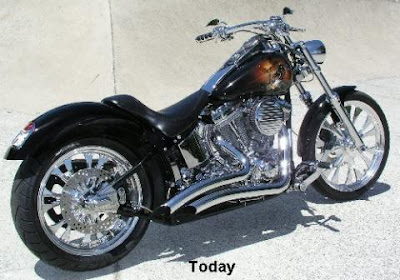 Over the last few years my bike has seen a fair few changes, some have been good, some down right bad. The bad ones were mainly from listening to guys that never thought further than the “Motor Co” square. Not that there is anything wrong with that but when I think of a custom Harley, I think of a bike that stands out from the pack, rather then one that blends into a mass of factory chrome and other factory accessories.

This latest customization has to be the best by far, the 200 tyre and paint job. The other mod that really impressed me 18 months ago was the 95 cube kit and the flowed “Rocket Heads” designed by Rick. Coupled with a 42mm Mikuni carby made all the difference in the power and torque gain. Back to the 200 tyre, I know what some of you might be saying, why don’t you buy a ’06 Standard with the 200 tyre already fitted? It comes back to a bike standing out from the pack thing again. I wanted something that the guard and wheel looked like it is a feature of the bike, not just another 200 tyre Softail Standard with an over sized factory guard.

I knew roughly what I wanted as far as a rear guard and wheels went but Rick gave me advice on both in the end. Rick also recommended using the LED rear tail light and indicators all combined in one unit as well. Roscoe set the 18”x 5.5” PM wheel and 200 Metzler tyre up in the standard swing arm after Rick machined the rear belt pulley down on the lathe to fit the 20mm belt. Rick then did the work on the rear guard, recessing the light fixture and profiling the guard. He also had to modify the struts for the guard as well. Rick had a Milwaukee Iron front guard that he was going to use on “Alien” but changed to another style so needless to say I jumped at getting that guard on my bike.

Rick organized to have the bike’s tin ware spray painted by Craig from Custom Spray Painting Concepts from the Sunshine Coast and Perry from Mallet Custom Art did the Artwork. Those boys really know their business.

By the way, the bike handles well with the 200 tyre. A slight change to my riding technique and I can honestly say it feels much more stable and positive in the back end under hard acceleration out of a 2nd or third gear corner.

There are a few good used Softail Standards getting around now at a reasonable price. This type of bike is a great base for a custom bike. Drop in and have a chat to Rick and the boys for some ideas. They will be more than happy to help.

Needless to say I couldn’t be happier with the results of my bike.

*Rick is from Gold Coast Choppers.
Posted by DC RIDERS at 2:24 PM