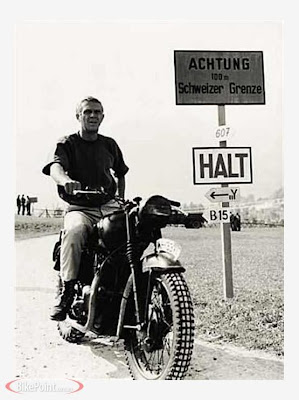 The last remnants of Steve McQueen's once massive vehicle collection was sold off at auction in Los Angeles in November of 2006, with the most expensive bike, a 1937 American-made Crocker V-twin, fetching a world record $361,000

But if you think those prices are out of control, spare a thought for the sanity of the person who spent $91,000 for a pair of the dead film star's sunglasses.

McQueen died at age 50 in 1980 and the majority of his collection was sold off at a Las Vegas auction over 20 years ago.

Crocker built motorcycles from 1936 to 1941. It started with a 3hp scooter and quickly switched to 1000cc V-twins using a mix of Harley, Indian and its own parts.
Posted by DC RIDERS at 7:52 PM