Inovative or Messed up? 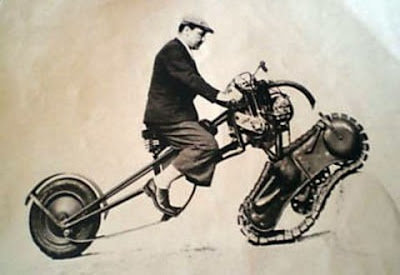 Unbelievably, in 1937 the French military thought that they might need some motorcycles that were also half tanks as well. And one of these very rare 350cc engined half-track Merciers actually still exists as a museum piece. Strangely, this technological mess even featured front wheel drive. But like all crazy half-track designs, this vehicle sacrifices the speed and maneuverability of motorcycles as well as the true off-road ability of a real tank, offering the best of neither design. Further, this awful design looks nearly as dangerous to the rider as any enemy action. Some things just shouldn't be built. Or should they? What trouble we could get into with something like this.
Posted by DC RIDERS at 6:50 PM