The UNO is a northern design from an exciting young designer. Check out the other concepts by typing "Concept" in the search bar on the top left of our page. There is another mono wheel by bombadier but Bens design is on its way to production! 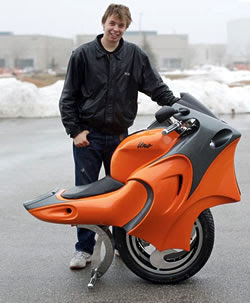 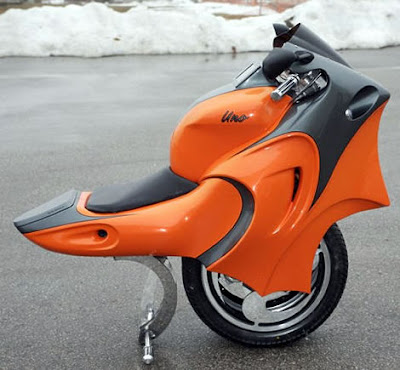 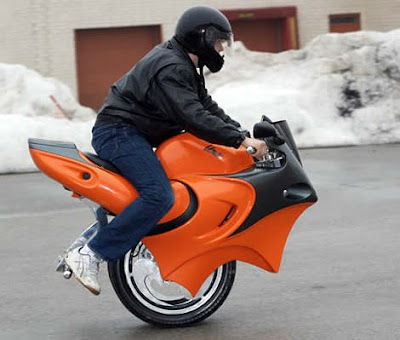 18-year-old Canadian, Ben J. Poss Gulak, has always done a lot of tinkering, model trains, rockets, that sort of thing, but the Uno, is something else entirely. The Uno, is a parallel wheel, electric motorcycle that operates like a Segway, lean forward to go forward, lean backwards to go in reverse. Ben unveiled his creation at the 2008 National Motorcycle Show in Toronto, where he was surrounded by the usual V-twin crowd, in fact his booth was right next to Russ Mitchell of Exile Cycles, but he managed to get a lot of attention, anyway.

Ben started his design with hand sketches and then moved to Google SketchUp. A Solidworks salesman tried to sell him a copy of the CAD software but Ben said it was more than he could afford. After he showed the salesman what he was doing, a copy of Solidworks showed up the next day. Cool.

The frame was adapted from a Yamaha R1, the body is custom built from foam which was eventually used for a fiberglass mold. He got some help with the gyro setup from robotics and gyro expert Trevor Blackwell in California. The Uno has 2 gyros, one for the forward and reverse movement, the other for turning. Once those were sorted out the Uno was in operation.

If this is the sort of thing Ben is building at 18, I can only imagine what we'll see in the future. Very well done, Ben!
Posted by DC RIDERS at 3:59 PM